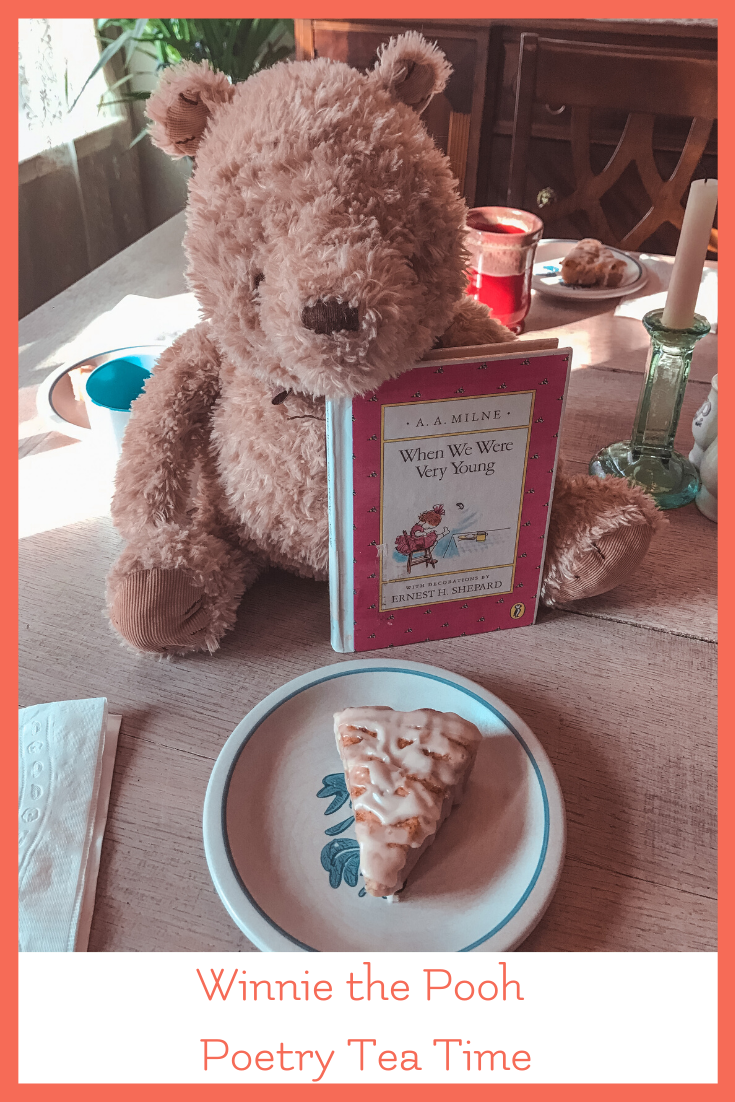 National Winnie the Pooh Day on January 18th commemorates author A.A. Milne’s birthday in 1882. He is the author who introduced the world to the lovable Mr. Edward Bear in the poem Teddy Bear in the 1924 publication of When We Were Very Young. This bear, proud of being short and stout, would go on to become Winnie the Pooh in the 1926 book of the same name.

Milne’s lovable Pooh Bear, as he was fondly called, is a fictional bear inspired by a black bear named Winnie. Winnie lived at the London Zoo and had a rather remarkable life during World War I. The author’s son, Christopher Robin, would visit the bear often and named his own teddy bear after her and a swan named Pooh. 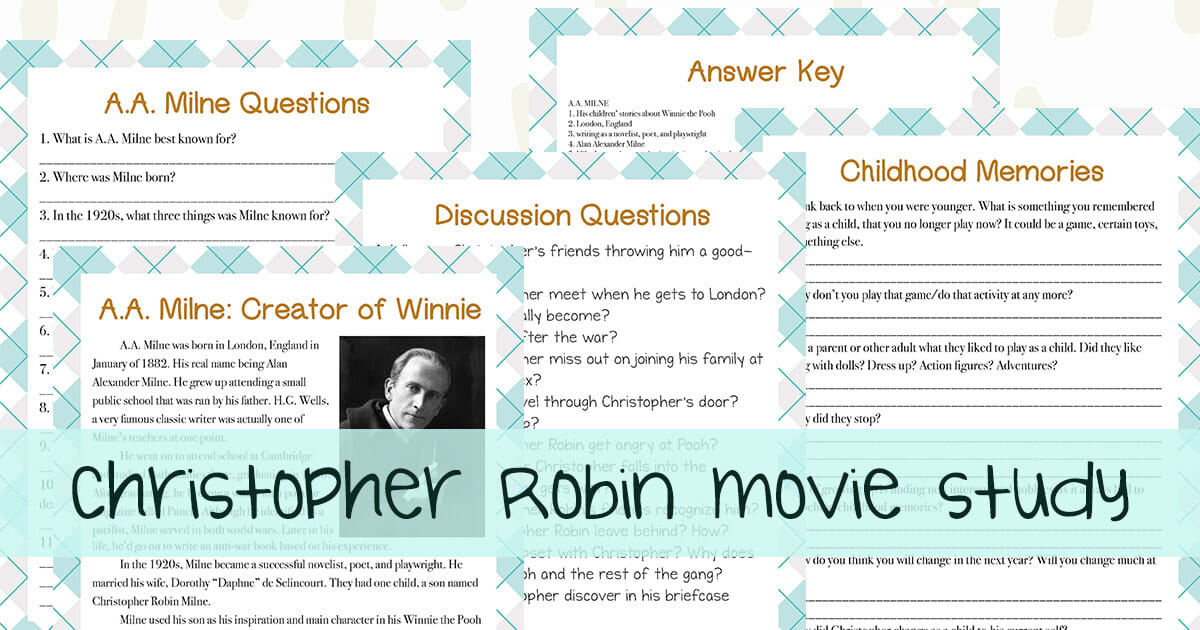 The adventures of Christopher Robin and Pooh Bear took them and millions of children through the magical world of the Hundred Acre Woods. The wonderful characters became beloved around the world.

To help you celebrate, we’ve collected some of our favorite poems from A. A. Milne’s When We Were Very Young (a sweet poetry collection published in 1924 that entered the public domain in January of 2020!).

You can download them below along with our delicious honey scone recipe to help alleviate any rumblies in your tummies.

Listen to poems from When We Were Very Young here: 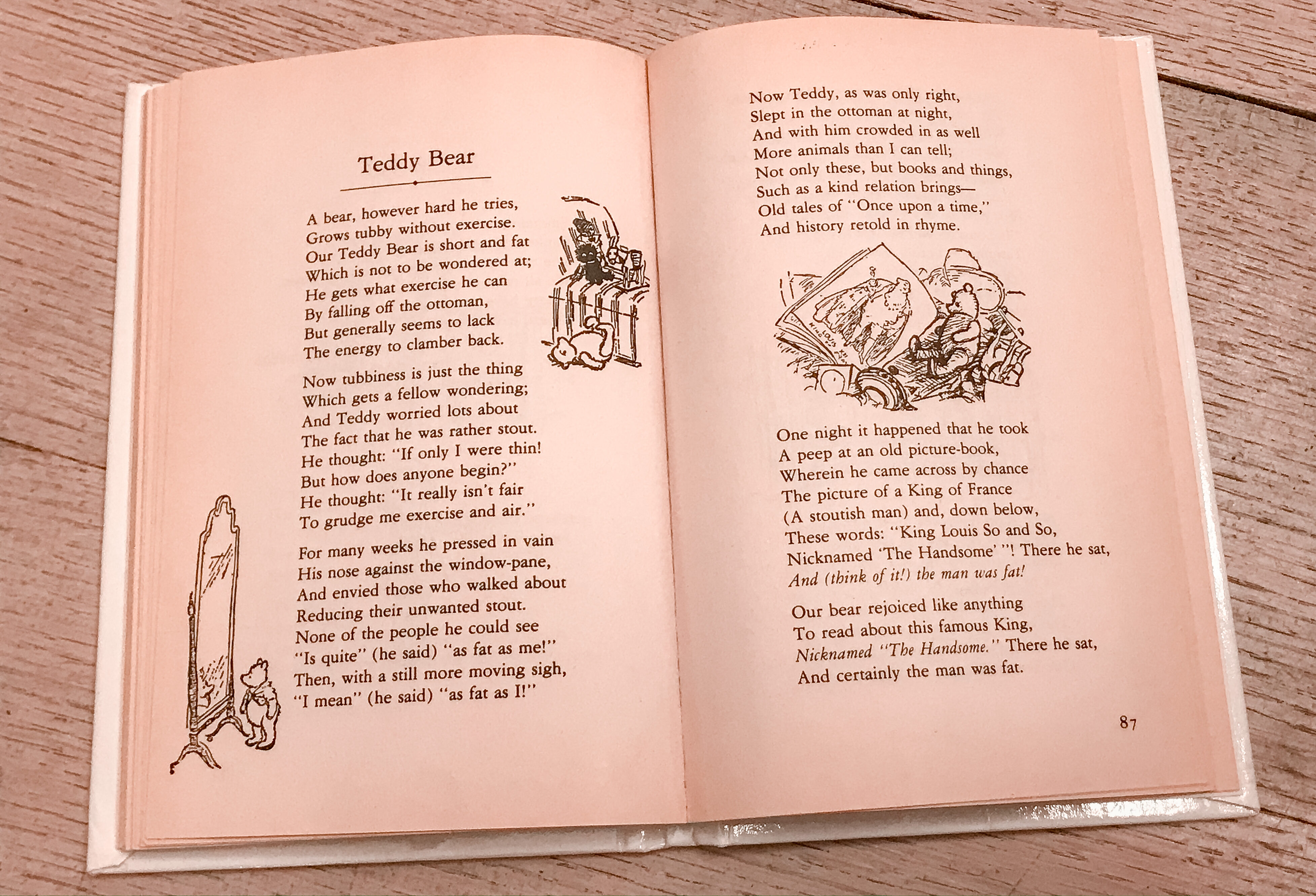 A bear, however hard he tries,

Our Teddy Bear is short and fat

Which is not to be wondered at;

He gets what exercise he can

By falling off the ottoman,

But generally seems to lack

The energy to clamber back.

Now tubbiness is just the thing

Which gets a fellow wondering;

And Teddy worried lots about

The fact that he was rather stout.

He thought: “If only I were thin!

But how does anyone begin?”

He thought: “It really isn’t fair

To grudge me exercise and air.”

For many weeks he pressed in vain

His nose against the window-pane,

And envied those who walked about

None of the people he could see

Then, with a still more moving sigh,

Now Teddy, as was only right,

Slept in the ottoman at night,

And with him crowded in as well

More animals than I can tell;

Not only these, but books and things,

Such as kind relation brings—

Old tales of “Once upon a time,”

And history retold in rhyme.

One night it happened that he took

A peep at an old picture-book,

Wherein he came across by chance

The picture of a King of France

(A stoutish man) and, down below,

These words: “King Louis So and So,

Nicknamed “The Handsome”! There he sat,

To read about this famous King,

Nicknamed “The Handsome.” There he sat,

And certainly the man was fat.

Nicknamed “The Handsome.” Not a doubt

The man was definitely stout.

Why then, a bear (for all his tub)

For now he felt a slight misgiving:

“Is Louis So and So still living?

Fashions in beauty have a way

Of altering from day to day.

Is “Handsome Louis” with us yet?

Next morning (nose to window-pane)

The doubt occurred to him again.

One question hammered in his head:

Thus, nose to pane, he pondered; but

Swung open. With one startled “Oh!”

Our Teddy disappeared below.

There happened to be passing by

A plump man with a twinkling eye,

Who, seeing Teddy in the street,

Raised him politely to his feet,

And murmured kindly in his ear

Soft words of comfort and of cheer:

Our Teddy answered not a word;

It’s doubtful if he even heard.

Our bear could only look and look:

The stout man in the picture-book!

That “handsome” King—could this be he,

This man of adiposity?

“Impossible,” he thought. “But still,

No harm in asking. Yes I will!”

His Majesty the King of France?”

The other answered, “I am that,”

Bowed stiffly, and removed his hat;

Replied politely, “Even so!” 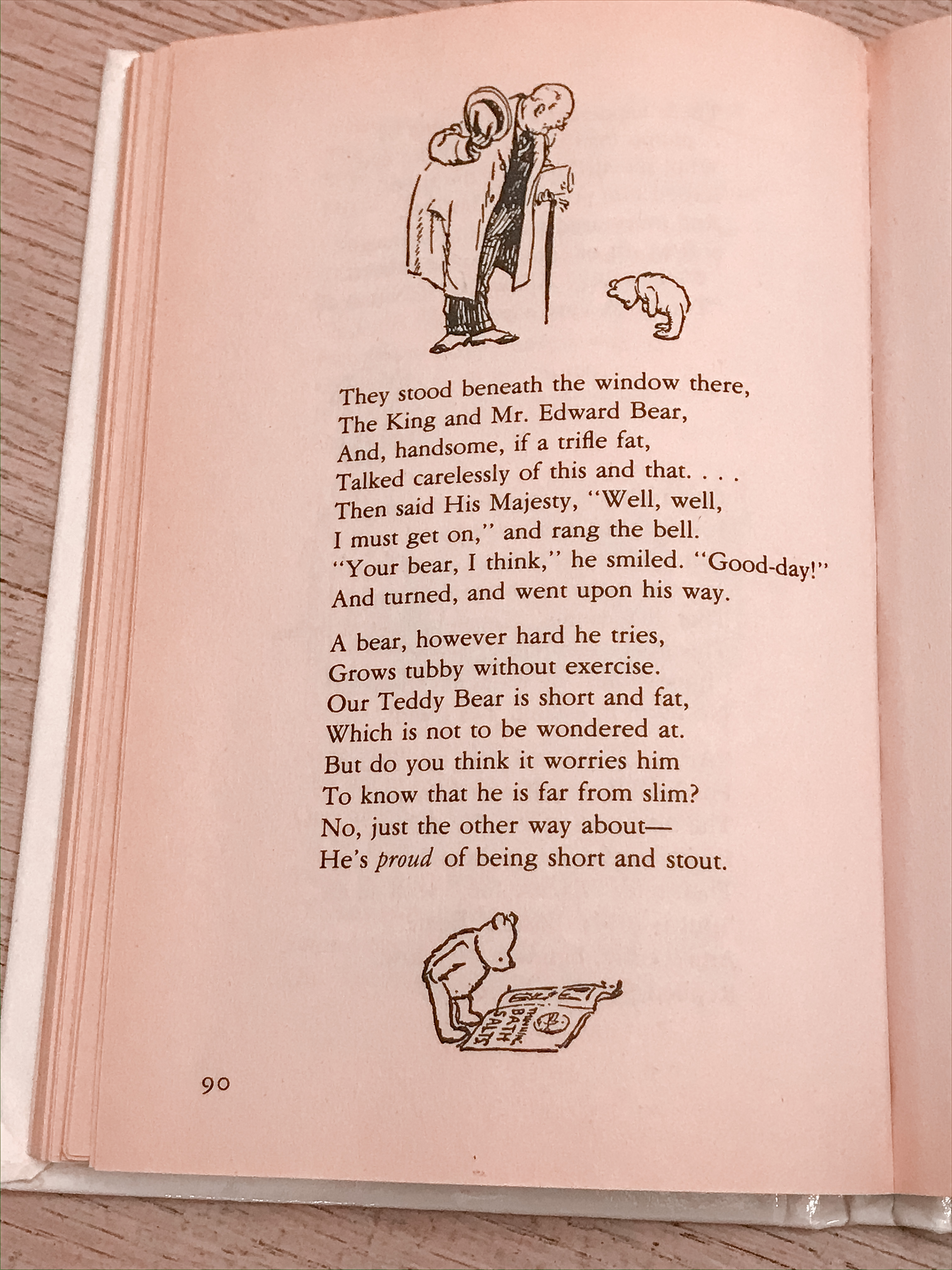 They stood beneath the window there,

The King and Mr. Edward Bear,

And, handsome, if a trifle fat,

Talked carelessly of this and that. . . .

Then said His Majesty, “Well, well,

I must get on,” and rang the bell.

And turned, and went upon his way.

A bear, however hard he tries,

Our Teddy Bear is short and fat,

Which is not to be wondered at.

But do you think it worries him

To know that he is far from slim?

No, just the other way about—

He’s proud of being short and stout.

Homeschool tea time wouldn’t be complete without delectable snacks to accompany delightful poetry. These yummy honey scones are such a hit with our family! They are very much like the dense biscuit style scones enjoyed by our friends across the pond so it makes this a true English tea that Pooh would very much approve.

2 ¼ cups flour, plus additional for the floured surface

For glaze (if desired):

5. Brush the scones with melted butter and sprinkle with turbinado sugar.

6. Bake for approximately 15 to 20 minutes minutes or until scones are crispy on the outside and soft in the middle. Cool before adding the glaze.

7. To make the glaze, whisk all ingredients together. Drizzle over scones. 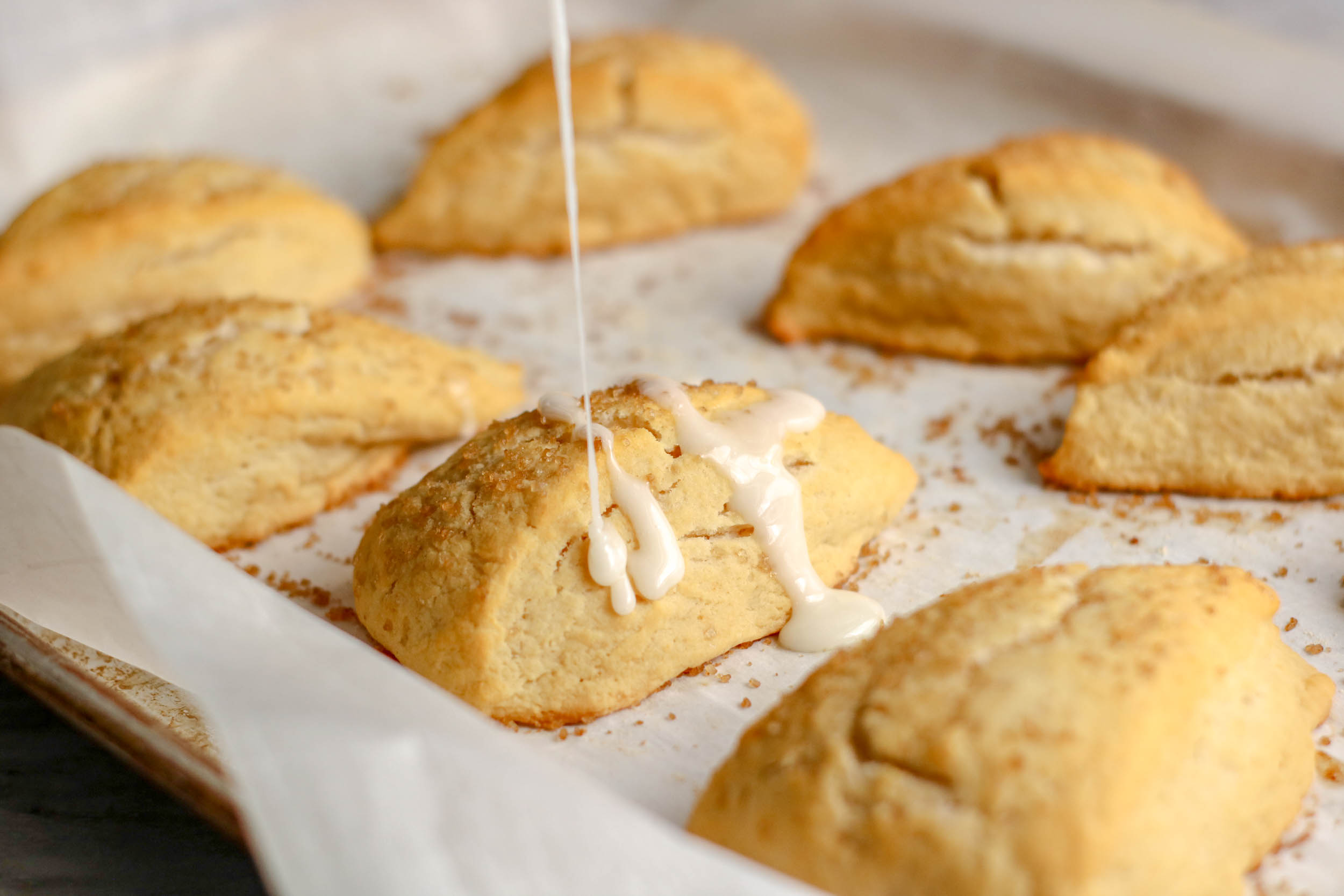 A Chalk Pastel Art Lesson for Winnie the Pooh Day

We love drawing with Nana at You ARE an Artist and this sweet and simple chalk pastel art lesson is perfect for tea time. You just need your chalk pastels, white paper, and a damp paper towel for cleaning dusty hands!

This is a great lesson to have before or after your scones. Eating and painting don’t go well together 😉

Be sure to share your Winnie the Pooh day tea time with us with the hashtag #THGmorningtime so we can celebrate together.