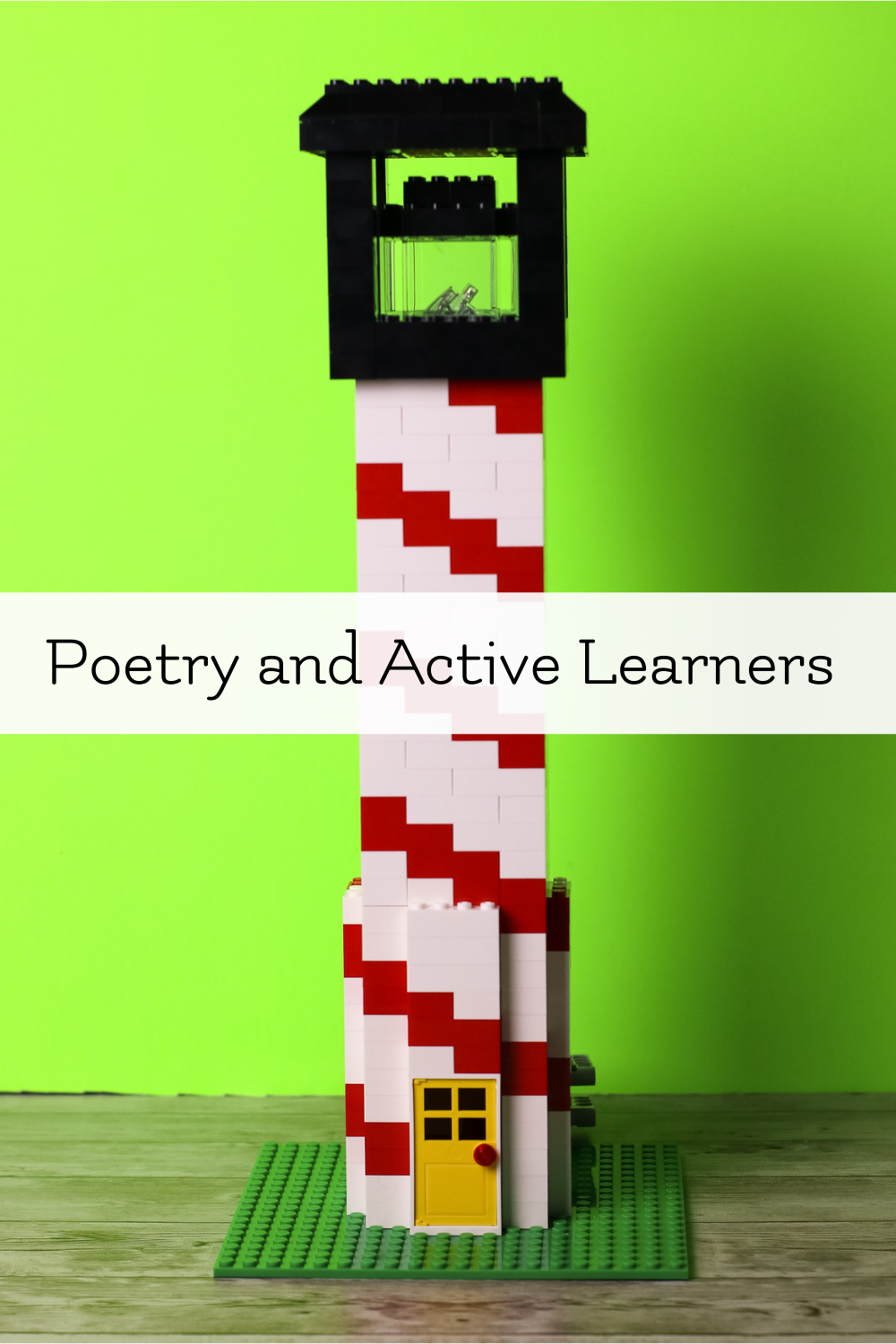 Poetry Study in your Homeschool

Poetry Study is something most Charlotte Mason and Classical homeschoolers are familiar with. It’s a source of joy or tribulation, depending on the day. Am I right? 😉

When you have active learners but want to start including longer poem readings, is there a way to keep them engaged and keep your temper? Yes!

There are many ways to keep your young scholars attending to the language lesson at hand, but the one that is our very favorite includes those beloved (and painful if stepped on) bricks – LEGO.

Why do I go to great lengths to keep my very active boy engaged in the first place? Because I believe that words have power. They can bring life and beauty and comfort and strength and restoration. I want my children to be exposed to the magnificence of language and poetry is the perfect way to do just that.

It also helps build vocabulary, mental muscles, and comprehension. But it truly is a wondrous way to convey a story or emotion with a depth and loveliness that prose cannot.

We’ve been using LEGO, origami, doodle notes, and other tools to help wandering minds and hands stay focused for years now. We play LEGO games and I sometimes challenge them to build something from the reading we are doing. A good old box of LEGO is just fine for your everyday learning, but I have found that as my boys have gotten older, sometimes a specific project that is tied into our learning is even more helpful for them.

The example I have for you below is a wonderful LEGO lighthouse (that really lights up!) and a poem by Longfellow. The poem is a bit long for my runner/jumper/explorer/climber boy so as we read and reread over a few weeks of study, he used the plans to build the lighthouse a little bit at a time. It kept him engaged and his hands busy so it was a win-win for all of us. We did a similar boat, tower, and lady mini figure when we read Lady of Shalott. The options really are limitless!

Another aspect of our homeschool that LEGO has been helpful in is memory work. We love using LEGO mini figures to assist in narration and as memory aids for memorization which is often difficult for my son with dyslexia.

When we make learning fun, pleasant, and allow our children the tools that help them be successful, home education is just more joyful all around! Be sure to grab your printable poem and LEGO building plans below and try out LEGO learning with your active learners.

Some of our favorite LEGO sets for listening time: 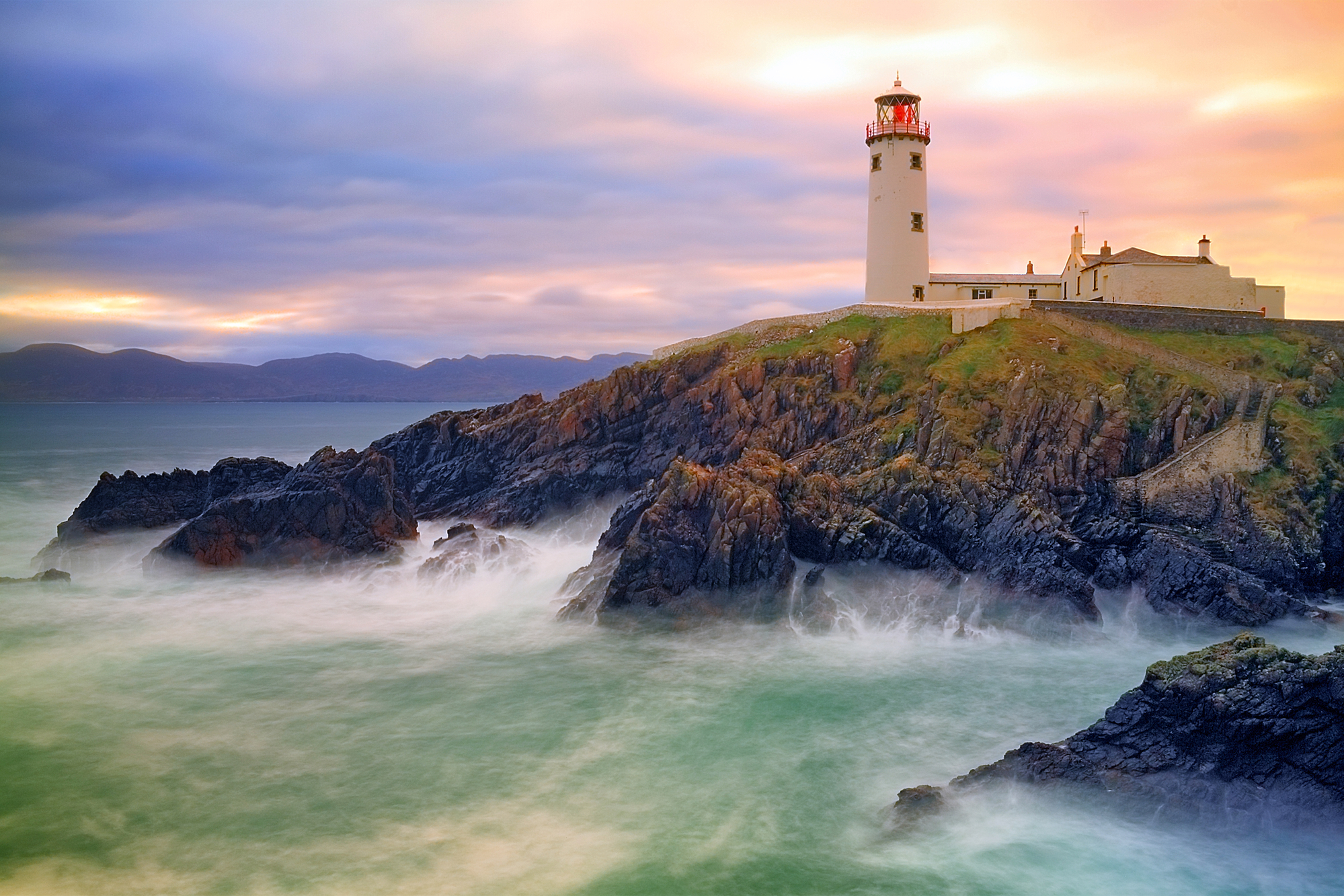 The Lighthouse by Henry Wadsworth Longfellow

The rocky ledge runs far into the sea,
And on its outer point, some miles away,
The Lighthouse lifts its massive masonry,
A pillar of fire by night, of cloud by day.

Even at this distance I can see the tides,
Upheaving, break unheard along its base,
A speechless wrath, that rises and subsides
In the white lip and tremor of the face.

And as the evening darkens, lo! how bright,
Through the deep purple of the twilight air,
Beams forth the sudden radiance of its light
With strange, unearthly splendor in the glare!

Not one alone; from each projecting cape
And perilous reef along the ocean’s verge,
Starts into life a dim, gigantic shape,
Holding its lantern o’er the restless surge.

Like the great giant Christopher it stands
Upon the brink of the tempestuous wave,
Wading far out among the rocks and sands,
The night-o’ertaken mariner to save.

And the great ships sail outward and return,
Bending and bowing o’er the billowy swells,
And ever joyful, as they see it burn,
They wave their silent welcomes and farewells.

They come forth from the darkness, and their sails
Gleam for a moment only in the blaze,
And eager faces, as the light unveils,
Gaze at the tower, and vanish while they gaze.

The mariner remembers when a child,
On his first voyage, he saw it fade and sink;
And when, returning from adventures wild,
He saw it rise again o’er ocean’s brink.

Steadfast, serene, immovable, the same
Year after year, through all the silent night
Burns on forevermore that quenchless flame,
Shines on that inextinguishable light!

It sees the ocean to its bosom clasp
The rocks and sea-sand with the kiss of peace;
It sees the wild winds lift it in their grasp,
And hold it up, and shake it like a fleece.

The startled waves leap over it; the storm
Smites it with all the scourges of the rain,
And steadily against its solid form
Press the great shoulders of the hurricane.

The sea-bird wheeling round it, with the din
Of wings and winds and solitary cries,
Blinded and maddened by the light within,
Dashes himself against the glare, and dies.

A new Prometheus, chained upon the rock,
Still grasping in his hand the fire of Jove,
It does not hear the cry, nor heed the shock,
But hails the mariner with words of love.

“Sail on!” it says, “sail on, ye stately ships!
And with your floating bridge the ocean span;
Be mine to guard this light from all eclipse,
Be yours to bring man nearer unto man!”

1. Place the door frame on the base plate. 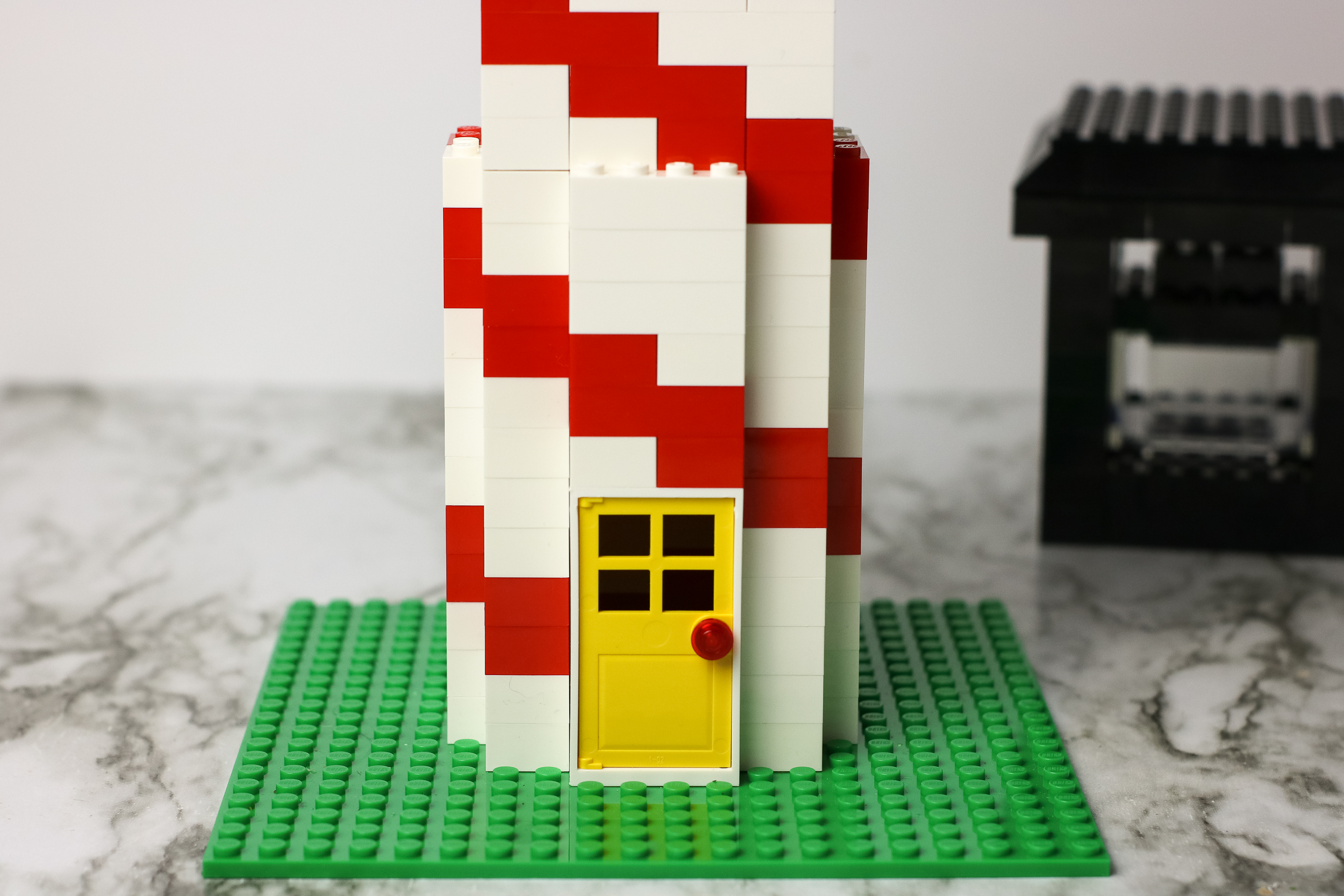 3. Build the lighthouse tower as tall as desired.

4. To create the crowning light box, begin with the base of the box using 2×4 black bricks. 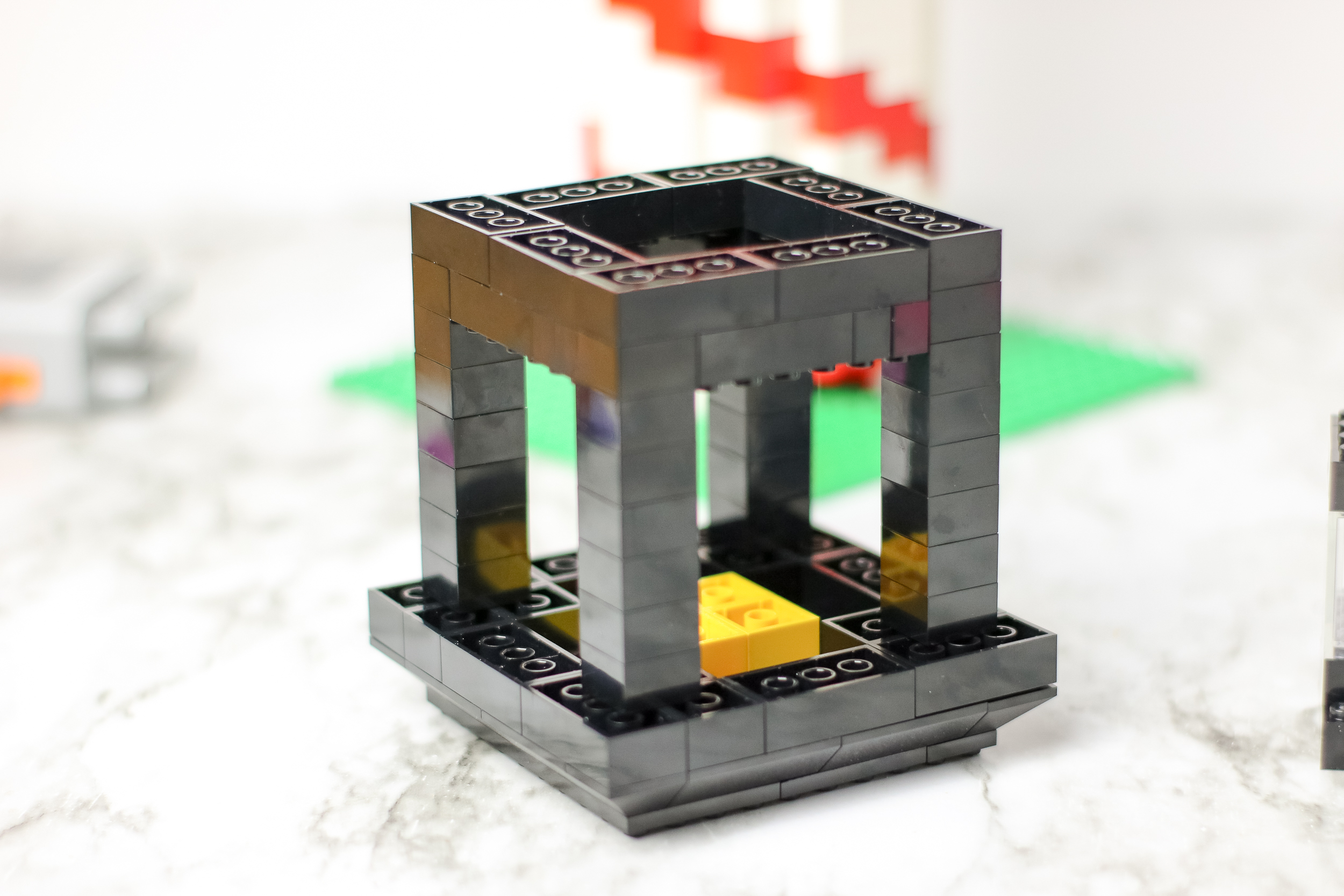 6. For the second layer of the light box, use 1×1 bricks and 1×4 bricks to fill in the space between the corner columns.

7. Construct the inner light box using 2 rows of 2×4 and 2×2 bricks in black. Attach the transparent wall elements like windows to encase the light.

8. If not using the Power Functions light, create a stack of 2×2 bricks in yellow and place it in the middle of the wall elements.

9. Secure the top of the inner light box using additional 2×4 bricks in black.

10. Place the inner light box inside the crowning light box.

11. Construct the roof of the crowning light box using 2×2 and 2×4 bricks in black. Add the panels to the top and then finish the roof by edging with the roof tile bricks and roof tile corner bricks. 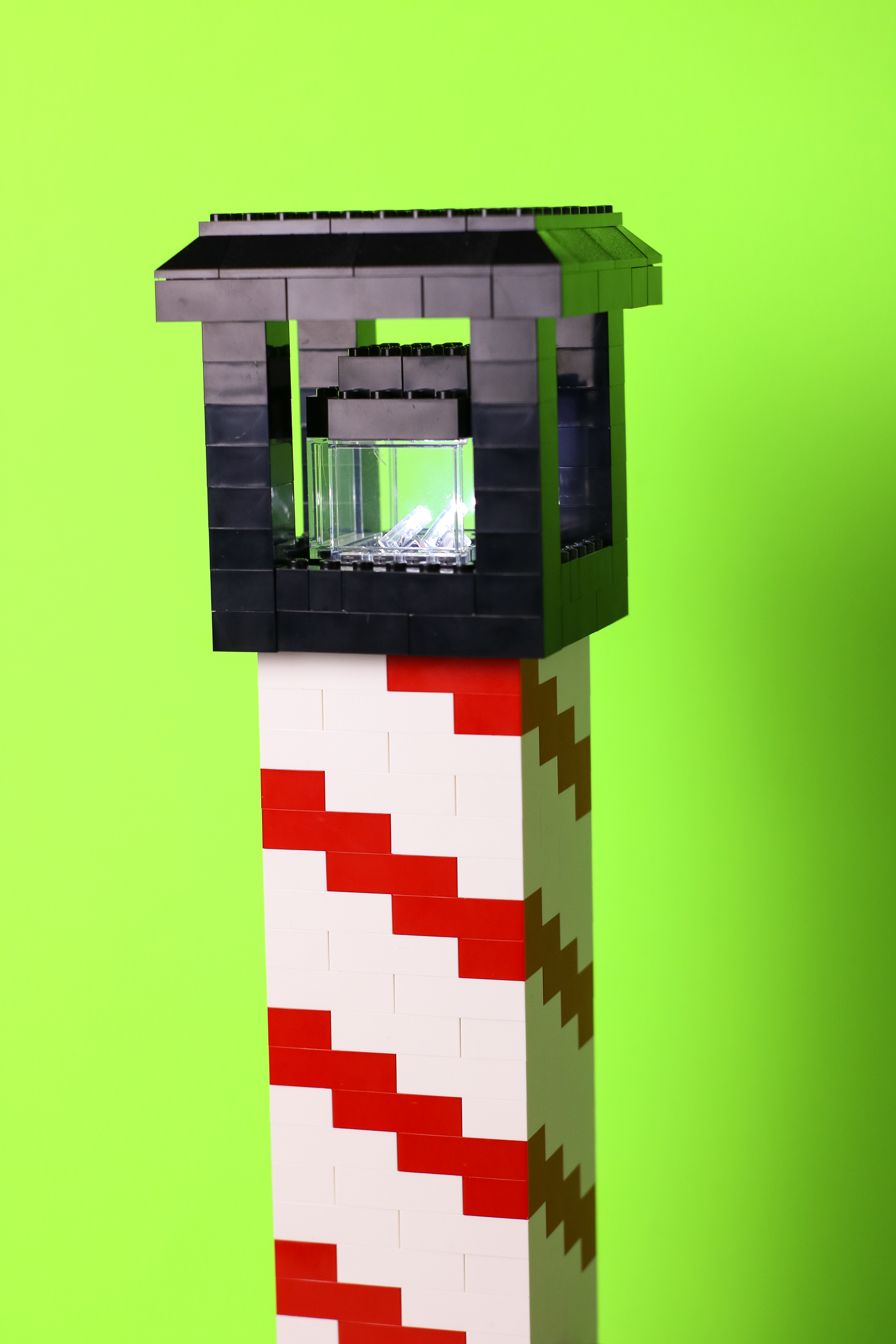 Joy is a choice, friends. It is choosing to respon

The incredible thing about a Charlotte Mason educa

Ah, how the world does get heavy sometimes. But fr

A peek inside A Gentle Thanksgiving activity book

Hello, friend! I’ve been quite in this space lat

Find our favorite Autumn books for every age and a

Charlotte Mason had a strong command of language a