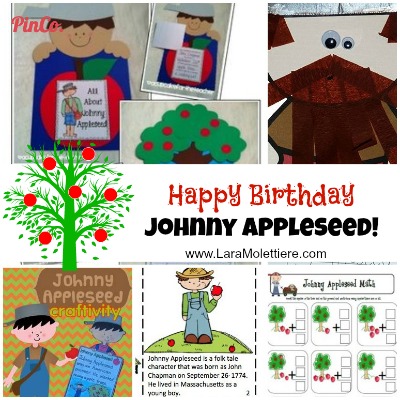 As August winds down, here is a fun celebration for you to enjoy with your kids in September!

John Chapman was born to Nathaniel and Elizabeth Chapman on September 26th, 1774. His father was a Minuteman and also served in the Continental Army with General George Washington. His mother passed away during the birth of John’s younger brother, who also passed away about 2 weeks later. Nathaniel Chapman remarried and had 10 children with his new wife.

John left at age 18 to go west and convinced his 11 year old brother, Nathaniel to go with him.  They lived as nomads moving from place to place until their father and his large family met them in Ohio in 1805. The young Nathaniel stayed with the family to farm and John became and apprentice to Mr. Crawford, an orchardist.

Popular legend has John Chapman, renamed Johnny Appleseed by the people who knew him and knew of him, has him traveling across the country planting orchards all over the place.

Johnny Appleseed actually planted nurseries. He built fences to protect them from livestock and left them under the care of neighbors, who earned money from shares of the saplings they sold. Every 2 years or so, Johnny would return to take care of the nurseries.

The nurseries were mostly sour apples because the pioneers use apples for hard cider and apple jack, both of which were very important for settlers, especially in areas where there was little clean water for drinking. Though he chose a life of extreme simplicity, John Chapman was a very wealthy man.

John Chapman was a missionary for the Swedenborgian Church during his life, a vegetarian in later years, and he had a deep love of animals. The Native American’s believed he was touched by the Great Spirit so even the more hostile tribes left him alone during his travels across the land.

Johnny Appleseed is believed to have died on the 18th of March, 1845, though there are a few contradictory statements saying he died the summer of 1847.

He left behind many wonderful orchards and nurseries and many tales of his eccentricities, such as the pot/hat (true, by the way!), that have become more embellished in the years since his passing and turning him into the legend we all know today.


Follow my Johnny Appleseed Pinterest board for crafts, books, free printables, and recipes for a month full of apple-licious delights!

We will be making Honey Apple Chicken, Baked Apple Doughnuts (gluten free), Apple Nachos, and more yummy goodies this month! And of course this homemade version of Starbucks Caramel Apple Cider! I can’t wait to try building with apples during snack time with the boys! We will also learn about the Apple life cycle, putting together this mini-book, and using these great free coloring sheets! If you find more great apple resources, please leave the link below!

Resources for Learning About Johnny Appleseed:

The Story of Johnny Appleseed by Aliki

Who was Johnny Appleseed?

Previous Post: « Our Homeschool Curriculum Picks for 1st and 3rd Grades
Next Post: 5 Reasons Good Posture is a Must for Your Student »